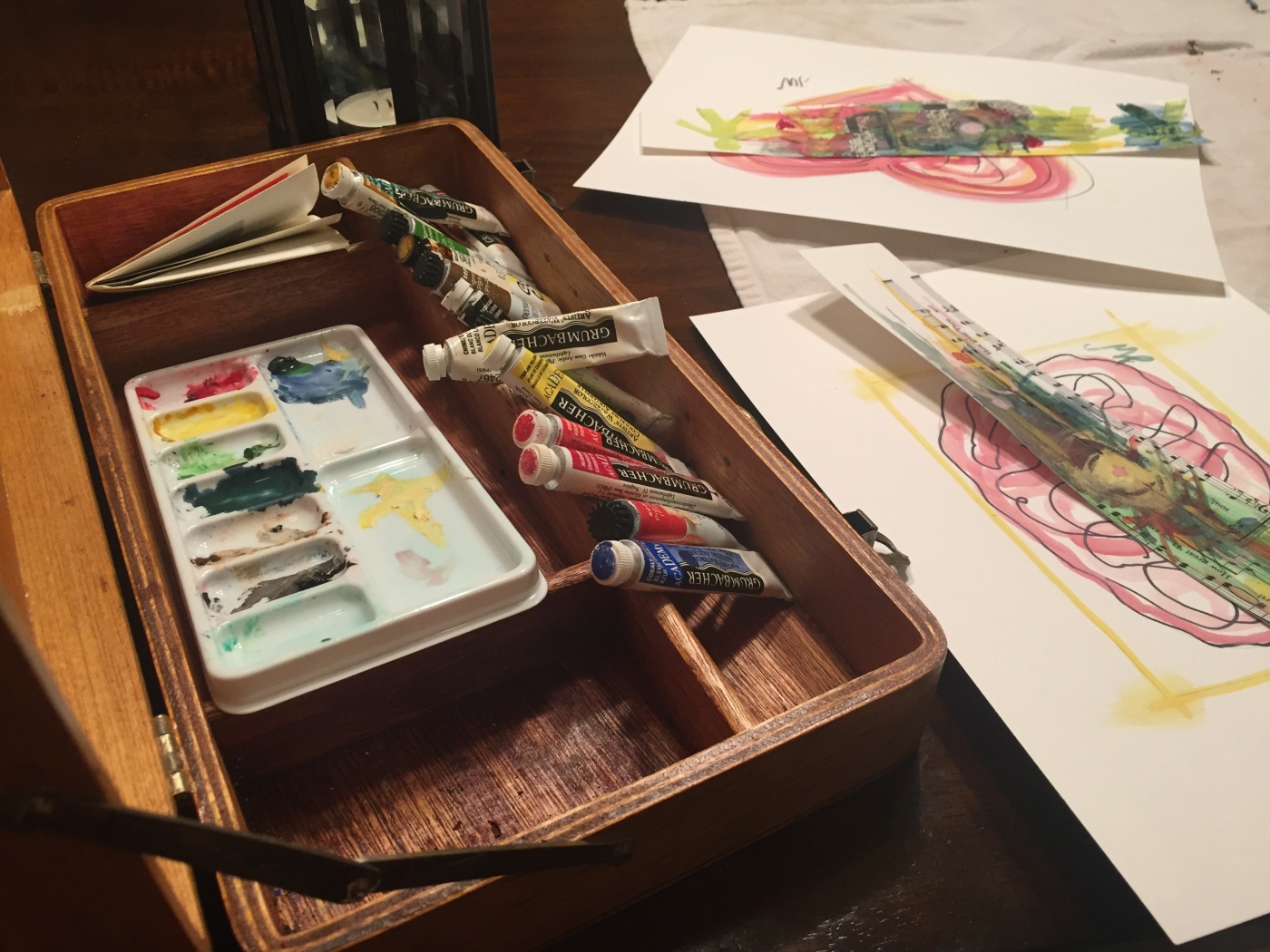 Last week, we posted about the many talented people of BLDD who created artwork to make a difference in the fight against Alzheimer’s.

This week, I wanted to share a personal story behind the artwork that I contributed to the effort, in honor of two very special people…. my maternal grandfather and paternal grandmother.

Alzheimer’s Disease affected these two dear souls, and all of the people who loved them. These pieces are a representation of how simple things bridge the gap of both heart and mind, stealing a moment of clarity from a devastating disease.

While these stories are uniquely theirs and so very personal to me, there are universal elements that I’m sure will ring true with you if you have experienced this disease.  Please know that you’re not alone, and I’d love to hear your story too, if you’d like to share!

Lela Lucille (Johnson) Carlton (1915-2012) was the stereotypical grandma of her day…. a purse filled with candies for her grandkids, made a mean fried chicken, always had birthday cakes for us, and quirky little sayings for everything (“Isn’t it odd… my nose is running, and my feet smell!”).  As the wife of a pastor, she put her musical talents to use playing piano and organ for countless tiny churches in midwestern farm towns. She loved Jesus, her family, and her music, and she passed that along to her children and grandchildren.

When Alzheimer’s took her memory, it was painful to watch. She couldn’t remember her children’s names, how to take care of herself, or where she was. But amazingly, it was never able to take away her memory of music. If she heard an old song from church, the words and tune came back to her immediately.  It brought her so much joy to sing along again, and in those moments… she was BACK. For Grammy Lela, music brought moments of clarity.  Alzheimer’s took away so much of who she was, so much of what she knew, but music had the magical ability to give it back.

Edwin Godtfred Carlsen (1928-2016) was the son of Danish immigrants, and a straight-shooting, strong-willed, father of five who worked his way from milkman, to office manager of the dairy.  When it closed its doors and moved to Detroit he started over as a janitor at a chemical company and worked hard to move through the ranks and finally become a chemical researcher, all to provide for his family. His kids will tell you he was a no-nonsense, authoritarian dad, but I guess when your house is full of mouths to feed and chores to do, there isn’t a lot of time for fun.  As a grandpa, he was AWESOME!  He had mellowed over the years and he relished his growing family and spending time with them. From him, we learned to always do your best, to fish, to tell jokes, to laugh heartily, to drive a boat, to appreciate nature and those that you love.

Grandpa Carlsen was also one of the most intelligent people I ever knew, but in the practical sense.  He educated himself on everything he needed to know.  Alzheimer’s began to take this away a little at a time.  He could tell it was happening, and so started meticulously recording every activity of his day so he could look back later to remind himself. Grandpa Carlsen’s memory loss was especially hard for him because he took so much pride in his intelligence. In a matter of a couple years, he had to be reminded to do the simplest things, like putting on pants and eating. Alzheimer’s doesn’t just take away the brain, it also breaks hearts, and that was the case here.  Grandpa’s spirit was broken, and he became frustrated and angry daily.  My sweet grandmother just kept caring for him, even though she was living with a stranger most days.

For Grandpa Carlsen, visits from family and sitting next to his wife, holding her hand (he still called her the most beautiful woman in the world) bridged the gap that Alzheimer’s created.  Even though he couldn’t remember his grandkids’ names, being around them brought him joy, and brought back that dazzling smile and infectious laugh that we all loved.

PS – If you’d like to help support the cause by ordering notecards featuring any of the artwork, shoot me an email!

BLDD Architects, Inc. is an architectural planning and design firm, specializing in making our clients vision a reality through a collaborative, innovative, and empowering design process. With one mission, our offices support clients throughout the Midwest. www.BLDD.com